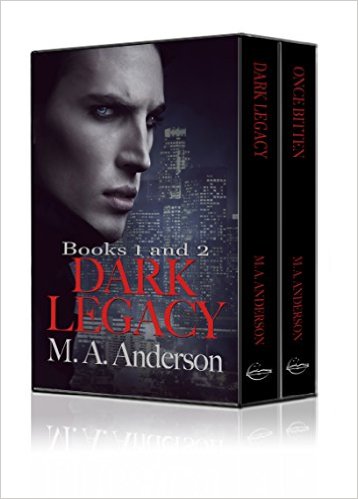 for one day
Not just another vampire novel!
Dark Legacy is the paranormal crime novel that will pull you into its thrilling, action-packed plot and leave you breathless!

How do you tell your best friend you’re a vampire? And how do tell him you think you’re a serial killer?

Andre Delacroix has lived a relatively normal existence. He’s a respected doctor, friend to one of the best detectives in Los Angeles, Reece Daniels, and can walk in the daylight, which assists his masquerade of being human. He’s about to ask the woman he loves on a first date. Everything in his life is perfect.

Until a series of teen murders leads Andre to believe he could be a vicious killer. Whoever it is kills like a vampire, but with one distinct difference. An ability only he and a handful of immortals share, but they are in Europe. And his lucid dreams point to him, so who else could it be?

When Reece heads up the murder investigation, he is drawn into a strategic game of cat and mouse: no clues, no DNA, and no suspects. Who is behind it? And when evidence comes to light who will it point to?

Is Andre committing these gruesome murders, or is something far more sinister lurking in the shadows of this all too real nightmare?

Once lead Homicide detective with the LAPD, and now paranormal Private Investigator, Reece Daniels vows to keep his city safe by eradicating the terrifying creatures that prey on humans in the dead of night…

When several teens are snatched off the streets of LA without a trace, something in Reece’s gut tells him these are no ordinary abductions. He and his team have been monitoring the intensified Lycan activity in the city, and he has a bad feeling it’s linked to the disappearances. If what he believes is true, time is running out for the missing teens.

After weeks without any leads, Detective Charlotte Delaney enlists Reece’s help to solve the case, before the department’s window of opportunity closes indefinitely. It may have already, but she won’t give up. The kids’ lives depend on it.

Reece is pleased to be working with Charlotte again, and finally admits to himself that he cares for her and wants to protect her from the horror he’s exposed to. Charlotte is unaware of his extracurricular PI activities and he wants to keep it that way. He knows he can’t hide the truth from her forever, but he will until there’s no other choice.

They need to find the missing teens before it’s too late. Reece and his team are racing against the clock! Will he allow Charlotte into his nightmare world, now that they’re working together? Or will she follow her cop instincts in pursuit of a calculating, sadistic predator, unaware of what she’s walking into?

Find out in this thrilling, action-packed Book Two of the Dark Legacy series ONCE BITTEN!

Free: The Wardrobe Queen: The Wild Lumberjack by Meg Lee
Free: Your Secret’s Safe With Me by Phoenix Rayne