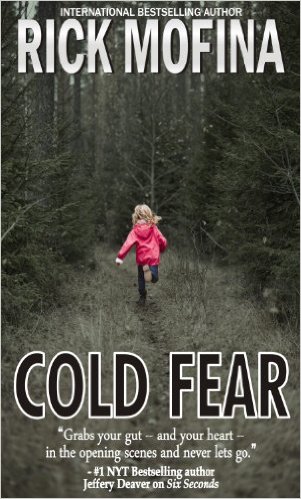 In the remote, rugged corner of Montana’s Glacier National Park known as the Devil’s Grasp, little Paige Baker of San Francisco disappears with her dog, Kobee, while on a camping trip with her family; or so her mother and father have told authorities.

A multi-agency task force launches a massive search as Paige fights to survive in the wilderness. Time hammers against her and soon the nation is gripped by the life-and-death drama.

Secretly, behind the scenes, the FBI grows suspicious of Paige’s parents. Their recent history and disturbing evidence links them to a horrible secret from the past.

Rick Mofina is a former crime reporter and the award-winning author of several acclaimed thrillers.

The International Thriller Writers, The Private Eye Writers of America and The Crime Writers of Canada have Rick Mofina’s books as being among the best in the world. His titles have been published in some 20 countries and have been praised by James Patterson, Dean Koontz, Michael Connelly, Lee Child, Tess Gerritsen, Jeffery Deaver, Sandra Brown, James Rollins, Brad Thor, Nick Stone, David

Free: While You Were Mine by Ann Howard Creel
Free: The Wardrobe Queen: The Wild Lumberjack by Meg Lee