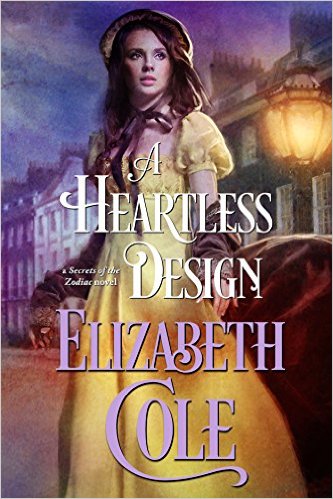 The debut novel in the Secrets of the Zodiac series: Full-length historical romances, featuring sexy storylines, complex characters, and international intrigue, set against the backdrop of the Napoleonic Wars.

An enigmatic woman, a determined spy, and a love that could shake the foundations of Europe…

“Heartless” Cordelia Bering refuses every marriage offer she receives. Yet men still try to win her, drawn by her sharp wit and intoxicating green eyes. But Cordelia knows a marriage could reveal her deepest secret and truly endanger her life. Besides, she hasn’t met a man worth considering, until…

Sebastien Thorne, a spy in the service of the Crown. One of the elite agents in the group known as the Zodiac, he comes to London determined to solve a mystery with roots on the Continent. He won’t let anything distract him. But is Cordelia a distraction, or the key to the mystery? As he learns more about the “heartless” woman, he becomes embroiled in secrets, plots, and a design that could change the future…and Cordelia is at the center of it all.

Novels in the Secrets of the Zodiac series include:
A Heartless Design
A Reckless Soul
A Shameless Angel
The Lady Dauntless
Beneath Sleepless Stars

Free Today: The Power Stones: Book 1 of the Secrets of Artasia by Erin Larene Wheeler
Free: To Buy A Wife: A Dystopian Sci-Fi Romance Novel (The Dark Future Series Book 1)