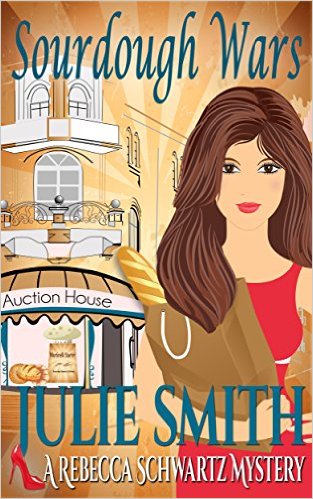 The SECOND book in Edgar-winning author Julie Smith’s Rebecca Schwartz series.
A tasty treat of a San Francisco mystery—a crisp, tangy story you’re sure to get a rise out of.
“…a brisk and breezy item, which—like sourdough itself—has its own distinctive and satisfying flavor.” -San Diego Union
“…an awful lot of fun, and it will make you unbearably hungry for fresh-baked bread.” -San Jose Mercury-News

TO YOU, ITS JUST A FROZEN LUMP OF DOUGH; TO SOME, IT’S LIFE AND DEATH…

Especially to handsome Peter Martinelli, who wants to auction off the fabled sourdough starter from his family’s famous bakery. But who’d buy a frozen hunk of flour and water? Only, it turns out, every bakery in San Francisco, a national food conglomerate, and an upstart ringer with a mysterious backer.

Someone would even kill for it. And does.

Rebecca noshes her way through the case in hilariously unorthodox style, tasting some great bread along the way, but also uncovering so many ancient jealousies, long-simmering feuds, and seething resentments that she barely escapes death by doughball.